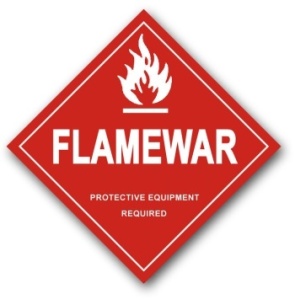 I’ve recently been arguing ideology with a reviewer of one of my papers. It’s quite strange that we don’t seem to do this much in HF and so I think we get pretty rusty – and resort to flame based shouting. In reality I’m not sure how much ideology should come into play when we talk about science – the scientific method should insulate us from most of this. But as humans we are fallible and so maybe a good argument means that we can change the way we think about ideas we have held sacrosanct for so long.

I suppose because human factors cannot have the same number of participants as, say, medical studies, then there is always some question or some doubt. The problem I see is that ideology is often built on what we want to see or believe, as opposed to what the studies tell us. We can argue that a certain method – such as adherence to WCAG, is all that is required for accessibility, and this is fine until empirical data tells us otherwise. Once we have these new facts then we need to modify and change, otherwise it is all just dogma.

Writing this I’m put in mind of a discussion on the BCAB mailing lists (some years ago) in which we asked for feedback on our new scalable transcoder. In reality we got a flame war suggesting that WCAG made transcoding redundant as it was only  there to overcome bad sites. Bad sites who should just get themselves accessible, all problems solved. While, I could get into this again I wont, but the reality is that AT performs transcoding like actions all the time – just view the transcoder as an AT WebApp – anyhow once we suggested the transcoder could be used for situational impairments (aka the Mobile Web) we saw these posts begin to dissipate. It seems it was accessibility transcoding that was at fault (forget all the niche accessibility  micro-browsers) not transcoding per-say.

Still only 10% of websites are accessible. 80% agreement on accessible as per WCAG 2 still leaves a big 20% hole where accessibility could be missed and so even WCAG conforming sites may not be accessibility. Is my accessibility the same as your accessibly? Do I want different things and will WCAG account for everyone’s needs – no I think not. There are so many arguments for transcoding backed up by sound empirical work that to suggest they aren’t needed is just dogma.

My point isn’t the benefit, or not, of transcoding – it’s our ability (which I think needs to be learnt and then regularly polished by argumentation and debate) to argue our ideology while being open to the counter arguments which may change our minds and give us better hybrid-ideas. To do anything less makes us politicians not scientists!